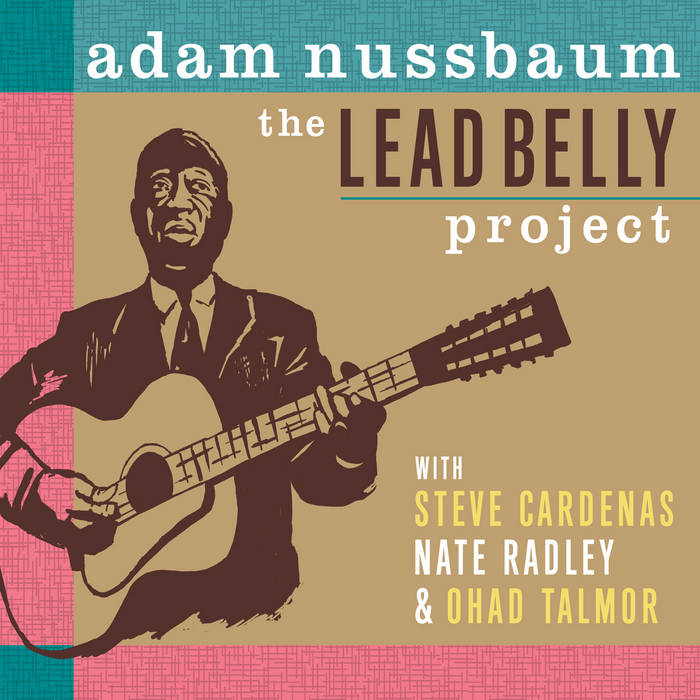 From jazz and soul to rock and country, the blues are the bedrock and a uniting feature for much of the popular music originating in the United Sates. The simple and repetitive structures are easy to grasp and perform, making the blues extremely approachable. Under the command of brilliant writers like the legendary Lead Belly, the blues maintains a unique place between high art and common expression.

The discovery of the music of Lead Belly was transformative for young Adam Nussbaum. The only child of artistic parents in Norwalk, Connecticut, Nussbaum was exposed to many recordings, from classical to folk to jazz and blues. It was the image of Huddie Ledbetter on the original Folkways 10-inch record covers that fascinated the five year old. The celebrated blues and folk musician’s music seared itself into his ears, as it does in young listeners, informing the future drummer’s musical approach for years to come, most explicitly on his new recording, The Lead Belly Project.

Nussbaum studied classical piano for five years, but it wasn’t until he was twelve that he focused on drums. He played in local bands before moving to New York to study at the Davis Center at City College. Most of Nussbaum’s education was earned by sitting in with other musicians and it wasn’t long before he caught the attention of the City’s most notable players, including Dave Liebman and John Scofield. His professional career began as he left school to go on tour with Scofield. He has remained a first call drummer over the past 30 years, playing alongside legends like John Abercrombie, Gil Evans, James Moody, Stan Getz, and many others.

Nussbaum has had a long association with bassist Steve Swallow, through whom he met saxophonist/composer/arranger Ohad Talmor, who then became a great friend and collaborator. It was Talmor who suggested that Nussbaum begin a new project. It was for this that the drummer decided to revisit some of the music that inspired him early on, specifically the music of Lead Belly. Nussbaum found that the simplicity and clarity of Lead Belly’s songs provided many possibilities in interpretation. It was only a matter of finding the right voices to fill out an ensemble.

For his quartet in addition to Talmor, Nussbuam decided to eschew the bass and employ two electric guitarists (two six stringers for Lead Belly’s single 12-string guitar) whose only requirements would be to be open-minded, stay out of each other’s way and be supportive of the music. Steve Cardenas was an obvious choice as Nussbaum had been a fan of his playing and felt that he would be receptive and sensitive to this melding of jazz, blues, and folk. Nate Radley was a perfect foil for Cardenas and a sensitive listener who could bring much to the music.

The Lead Belly Project was recorded in a single day at Talmor’s SEEDS performance space in Brooklyn with minimal direction or written music, proving yet again that if great musicians are used, complicated material is not needed. The music was experimental, concise, and, above all, honest.

The recording begins with “Old Riley,” which begins rubato and settles into a groove as Talmor channels Lead Belly’s expressive voice. The lively “Green Corn” is based on a single riff that is passed through the musicians, while the funky “Black Girl (Where Did You Sleep Last Night)” takes the familiar tune in an unexpected direction with a 5/4 time signature. The twangy “Bottle Up and Go” uses a jaunty reggae beat to enhance its swagger, while “Black Betty” borrows from the second line tradition of New Orleans for its dancing propulsion. “Grey Goose” is a brief piece that builds off the rhythmic information from the melody and then with the guitars and horn only to tease the melody at the end.

As with many blues tunes, “Bring Me A Little Water, Sylvie” has a bit of bitterness with its sweetness, with an obvious country inflection. The exciting “You Can’t Lose Me Cholly” is a swinging uptempo piece, while the Nussbaum original “Insight, Enlight” is a beautiful, meditative tone poem promoting reflection. The straight-ahead “Sure Would Baby” is another Nussbaum original and tribute to his wife. As a perfect closer to the program, Nussbaum chose the beloved tune “Goodnight Irene,” which is played in a grooving way with pointillistic touches from Talmor’s tenor.

The Lead Belly Project is a endeavor that brings Adam Nussbaum full circle. He is able to revisit his musical roots in the music that first inspired him and to bring together an ensemble able to project the emotion and earthiness of Lead Belly’s remarkable oeuvre.

Bandcamp Daily  your guide to the world of Bandcamp

Featuring Gary Bartz, 5 years of Rhythm Section Intl and an LP of the week by Nicolas Jaar